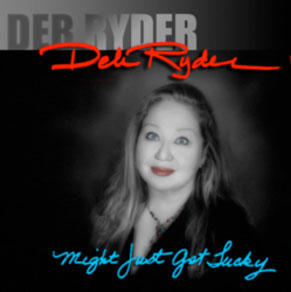 When a fresh new voice appears with a combination of power, grace, emotional depth and individuality, it is cause to celebrate. Deb Ryder, from Southern California by way of Chicago, shines like a bright ray from the new rising sun as an extraordinary singer, composer and producer on her debut album, Might Just Get Lucky.

Deb Ryder possesses exceptional talent and the artistic intelligence to effortlessly bend it to her will. Her resulting music illuminates the affairs of the heart and body with wit and hip-street poetry. Based in Los Angeles, she is best known for her powerhouse vocals, incredible range, and classic blues style. Just back on the local scene in the last few years, she is receiving acclaim from music critics as an up and coming blues artist, song writer, and recording artist. Deb’s passion for singing is matched by her powerful bluesy voice. Her writing and musical style ranges from the classic and familiar, to the more modern styling’s of today’s blues artists.

Ryder opens with the relentlessly shuffling “Get a Grip.” Channeling Louis Jordan, “Blue Collar Blues” jumps, jives and wails. On the easy loping “Really Gone,” Ryder uses her natural saucy growl” The low down title ballad has Ryder at her sultriest in a performance worthy of Billie Holiday. Then she pumps the energy with a sexy dose of funk on “Come On Home to Me.” There are sizzling, country-fried licks in the Zydeco-powered 12-bar blues of “Ce Soir Ce Soir,” (Tonight-Tonight). In the aching slow minor blues “Bad Bad Dream,” Ryder pours out every ounce of her tortured soul. With a taste of New Orleans we then have the minor key R&B of “The Angels Cried.” The raunchy chugging boogie blues of “Love Stealin’ Liar” finds Ryder giving hell to a cheating man. Ryder closes out Might Just Get Lucky with the acoustic gospel stomp of “These Hands.”

BIO: Born in Peoria Illinois, the family moved to Chicago where Deb was surrounded by the blues of Chicago’s streets and clubs. At a very young age, she was exposed to Jazz, Blues and Gospel by her father, Allan Swanson, a local singer and Chicago music sensation. When the family relocated to Los Angeles, Deb was reintroduced to the blues through the extensive record collection of neighbor and friend Bob Hite of the band Canned Heat. Bob and the band regularly performed at Deb’s stepdad’s famous 70’s Rock and Roll club, The Topanga Corral, where she opened nightly for such blues legends as Big Joe Turner, Charlie Musselwhite, Etta James, Taj Mahal and a long list of blues greats. Deb was a regular at Big Joe Turner's weekly blues night, where she spent hours with him carefully honing her vocals, while he rehearsed the band. During that same time, Deb spent time with Etta James who mentored her, and collaborated on some projects which forever and indelibly stamped her style, and sealed her love of singing, and of the blues. These collective artists, and her personal experiences with them over many years formed the influences that are recognizable in her vocal and writing style.

Deb studied music at UCLA, and later had a successful career as a studio musician/vocalist, performing on numerous national commercials for television, as well as background vocals on several albums. Her voice was the lead vocal for the award winning Las Vegas show “Splash." She returned to, and settled down to her blues roots when she met her husband, bassist Ric Ryder. Ric, a long time blues enthusiast and performer, encouraged Deb to write and sing the blues. Together they formed a band, The Bluesryders, playing local clubs, and blues festivals for the past 20 years. For Deb Ryder, blues is life, it’s the air she breathes, and when you hear her sing it, you know it’s true!